On Wednesday afternoon, we were having a discussion of various 64-bit ARM SoCs on the Adélie Linux chat. I mentioned that the only one I had was a PINE64, which did not support graphical display on the version of the Linux kernel we ship. Michael, one of our contributors, suggested I should buy a Raspberry Pi 3 for testing graphical software (such as KDE and Firefox). I was surprised to learn that Target carries the RPi3 and they had a few in stock locally. Off I went, stopping in for a 128 GB µSD card as well.

Then began the fun: I had a RPi 2B some years ago, but it was lost in the move. I only have experience booting these things using NOOBS, and I wanted to use NOOBS anyway because that would allow me an easy way to have multiple system images and choose which one to boot. This will let me perform 32-bit ARM testing on the RPi3 later on, when we support 32-bit ARM a bit better. Therefore the first order of business was to figure out how NOOBS’ boot menu works, so that I could write a custom configuration with the partition layout how I desired:

Since NOOBS erases the SD card on first boot, I booted NOOBS once on the Pi before continuing. Then I went to work in fdisk on my Talos:

Through trial and error, with a fairly good reference and reading the source code of NOOBS, I was able to divine the layout of my desired installed_os.json file. Once NOOBS is booted for the first time, it makes a small “settings” partition; this was /dev/mmcblk0p5 on the Pi and /dev/sdb5 in the SD card reader of my workstation.

I placed this file in the root of the settings partition (/dev/sdb5 in this example) and downloaded the header image from our Web site to /os/adelie.png on the same. Now the structure looked like:

Our Adélie easy-kernel package boots great on the PINE64 and a few other SoCs, but it needed small adjustments to be comfortable booting on the Raspberry Pi 3 B. In addition to the configuration knobs noted by the Raspberry Pi Foundation, we added CONFIG_FB_SSD1307=m and CONFIG_FB_UDL=m for eventual support of the Pi’s touchscreen interface. (I have not yet tested that and do not know if this is sufficient or not.)

Next was spending four hours trying to understand why the system booted properly but had no display on-screen. dmesg contained:

As it turns out, this was because I was using DTB files from a different kernel build. It’s incredibly important to use the DTB files that ship with the kernel you are testing with! After installing the correct DTB files to the SD card and booting again, a different message was output:

I rebuilt Mesa with VC4 support; our 32-bit ARM package had it already, but we did not enable it on 64-bit ARM. Then I installed KDE and X.Org: blackjack ~ # apk add kde x11 mesa-dri-vc4. Behold! 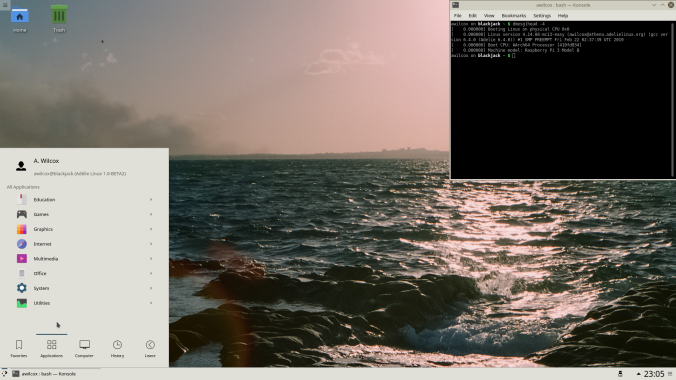 Please consider supporting our continued adventures bringing quality Libre Software to more platforms! You can find ways to help out on the Adélie Linux Contribution page, or directly on Patreon, PayPal, or Ko-fi. I hope this article was able to help you learn something new about your Pi.

Opinions mine - not those of any employer, past or present.