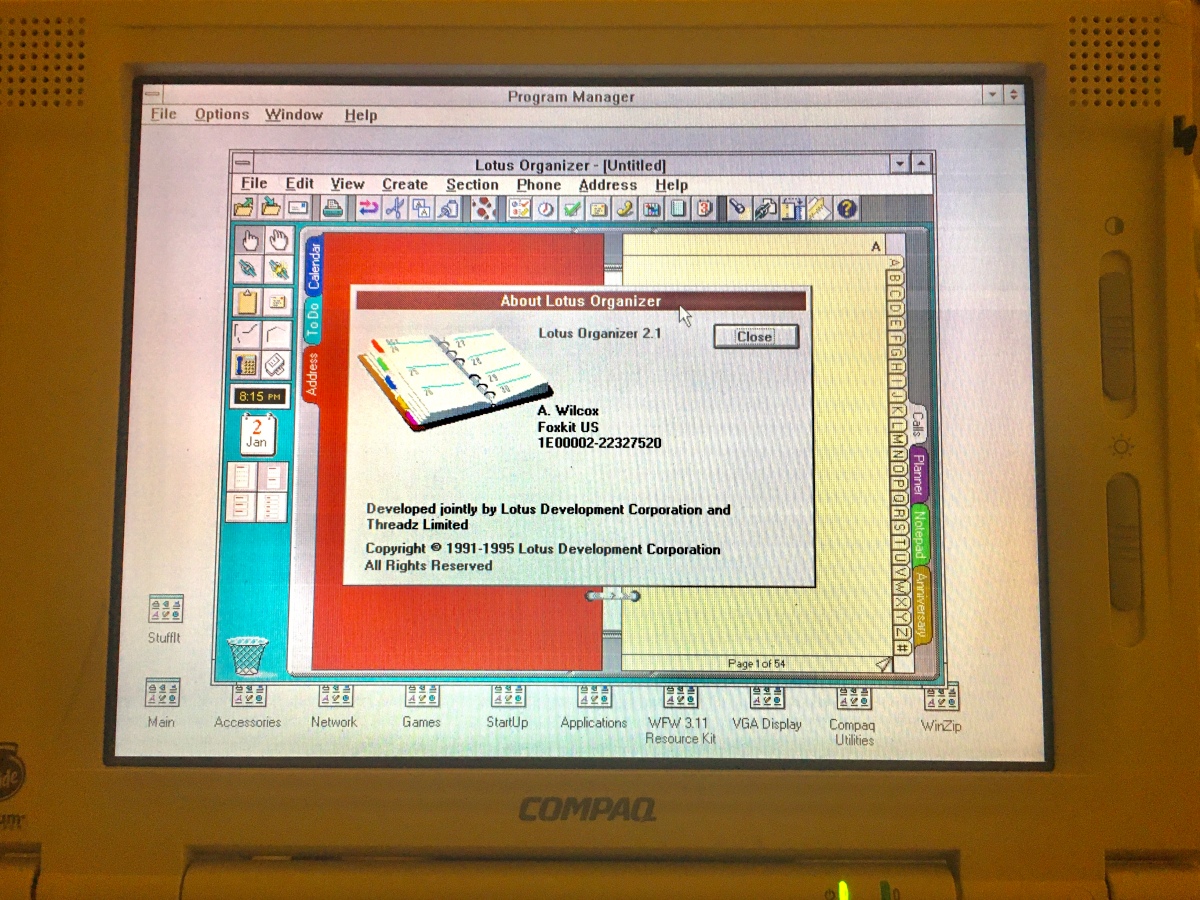 My plans for setting up a Retro Lab are finally coming to fruition, and this article is being written live on my tablet as I set up the first computer as I want it to be!

The computer in question is a portable computer from the Compaq LTE 5000 series, the 5150. (No relation to the IBM PC.) Released in September 1995, it features a Pentium professor at 100 MHz, 40 MB RAM, a quad-speed TEAC CD drive, an 11.3″ CSTN panel, Infrared, and an upgraded 6 GB IBM TravelStar hard disk drive.

Additionally, I own the MultiBay ISA docking station. This adds a high-quality 2.1 channel speaker system, NE2000 Ethernet adaptor, and SVGA connector. I plan on using an external monitor for games. However, the portability of this machine means I can take the Retro Lab on the road!

My LTE 5150 does not have a working floppy disk drive, and it was released before the “El Torito” standard allowed for booting from CDs. This means it can only boot from the hard disk. How to install an OS, then, if it means the disk needs to be erased?

My solution: put the hard disk in another computer, set it up, then put it back in the LTE!

I chose my Compaq Presario 2100 for installation tasks. It has a USB floppy disk drive that the BIOS is capable of emulating as a built-in one. DOS doesn’t even know the difference.

Windows for Workgroups 3.11 with standard VGA and EtherLink III drivers (the PCMCIA card I have) was simple to install from MSDN CD.

I have long read the NT should always be installed before OS/2, so that was next. Booting MS-DOS, I inserted the Windows NT Workstation CD-ROM and ran WINNT /B /X. This ensures that Windows NT copies boot files to the hard disk drive, removing the need for floppy disks. Once the file copy process was complete, I swapped the drive back in to the LTE 5150 so that Windows NT Setup would detect the proper hardware.

I selected the E: partition and told Windows NT to format the drive. While formatting the drive, the display suddenly developed lines and streaks in it. This is disaster #1:

It copied the files successfully though, so the computer restarted to load up NT and then… disaster #2:

I removed the CPU cover from the laptop and ensured the display connections were tight. Turned on the system while open and it was still not working properly. I asked my Mum, an electronics expert in her own right, if she had any ideas. She suggested messing with the grounding wire which worked. The display is restored to normal working order!

Unfortunately, the boot loader signature error persisted. I decided to use the NT disk setup to remove the D: and E: partitions and recreate them. This made it worse – now setup reported that “Drive C: cannot be examined”, and the computer presented a boot loop, booting directly into NT setup when rebooting. This is because $LDR$ has replaced NTLDR. This meant putting the hard disk drive back in the Athlon XP for some work involving boot floppies and CDs…

A simple SYS A: C: from a DOS floppy was enough to repair it enough to be bootable.

With my holiday break having just hours remaining, I gave up on NT and OS/2. I likely won’t be able to have any time for deep dives again until the Memorial Day weekend in May, so I need to make my time count.

I still have plenty of things I want to do with Windows 3.1, so I am going to just be happy with that.

Installing the audio drivers proved the most difficult. The SoftPAQ (SP2307) really wants to be installed from floppy. Extracting the files to the hard drive didn’t work at first. It turns out that what is needed is to extract the files from disk one to \ESS_1 directory and disk two to \ESS_2. Then running CPQINST from \ESS_1 worked for me.

I already have Lotus Organizer, Corel DRAW 5, and Quicken SE installed. There are some games I plan on installing, including some of my fav Sierra titles, a few Trails (Oregon Trail, Yukon Trail, Amazon Trail – all CD editions!), and perhaps a Carmen Sandiego or two.

Overall, this laptop has been a blast to play with, but I am disappointed that I couldn’t get NT going.

As a footnote: It looks like it isn’t a good idea to install OS/2 on a donor computer (like the Athlon XP), and I don’t believe it can be installed without booting off the floppies. Therefore, it is likely to be physically impossible to install.

Enter your email address to follow this blog and receive notifications of new posts by email.

Opinions mine – not those of any employer, past or present.